Test victories have always been vital for any team and they become folkloric when come against England, the inventors of this game. None of the teams have ever won a Test on their maiden visit to England but Pakistan did, way back in 1954 at the Oval. When the folklores of Pakistan Cricket are told to cricket-crazy-kids, they get started from the Oval, the win in England, the win against England. It took India 39 years and 7 tours, Sri Lanka 14 years and 4 tours but Pakistan, merely a tour, to win a Test in England. Even West Indies won their first in fourth attempt.

England-Pakistan contests have always been full of spice and, unfortunately, of controversies too. In the preceding decades, except for the series in 1996 and 2005, their every other confrontation was contaminated with something notorious. From Gatting-Rana Faisalabad Brawl (1987) to ball-tampering allegations (1992), Karachi Darkness (2000) to the unnoticed no-balls (Manchester 2001) and the Oval (2006) forfeiture-cum-fiasco to the corruptly-promised no-balls (2010); every saga had something of its own to derogate the game of Cricket. 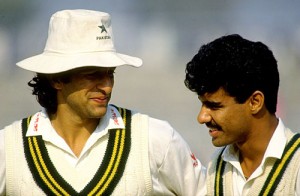 Wasim Akram (21) and Waqar Younis (22), they shared 43 wickets between them with their deadly swing and pace during 1992 five-Test series against England which Pakistan won by 2-1. (Photo by: Pascal Rondeau/Allsport)

In the eye of history, England’s success against Pakistan is overwhelmed but still, like a stubborn rival, on many occasions, Pakistan have forced England to question their strength. First, as mentioned before, at the Oval 1954 and then Between 1984 and 1996: Pakistan were rampage against England, beating them in 5 consecutive Test series – three of them were in England 1987, 1992 and 1996, the tours which are remembered by Imran-led-cornered-tigers and the menacing  pair of Ws. During those 12 years, Pakistan and England went head-to-head on 19 occasions but all England could manage was 1 Test win and Pakistan, stunning 7 victories.

Pakistan’s streak of five-series-win was ended by the sun set which put Karachi Test into darkness, in year 2000, also resulting in their first ever Test loss, in 45 years and 36 Tests, at National Stadium Karachi. Though Pakistan surged back, in their 2005 home series led by Inzamam-ul-Haq, by beating the then Ashes winners England, 2-0, which could have been 3-nill had the bad light not affected 2nd Test at Faisalabad but that resurgence was short lived as Pakistan were route badly, 3-0 in four-Test series, during their visit to England in 2006 and then 3-1 in their next visit of 2010. In last 8 Tests played between them, England won 6 and Pakistan only 1.

Now Pakistan have the chance to surge again to end 6-year drought of winning Test series against England. But they have a stiff task ahead. England are the incumbent of Number One spot in ICC Test Rankings and they have achieved it by drubbing Australia (3-1) in an away Ashes and whitewashing India (4-0) to dethrone them [India] from being Number One in Test Cricket.

The inexperienced Pakistan, whose 16-member squad have just 342 Tests between them, will be up against an experienced England team, having combined experience of 612 Tests, almost double to Pakistan’s. The 8 out of 16 players of Pakistan are yet to play a Test at their home (Pakistan) and their captain has never led them in Pakistan. The skipper of Pakistan Misbah-ul-Haq, who is in magnificent form with bat and leadership since taking over his country’s rein, is yet to play a Test against England whereas his counterpart Andrew Strauss has led his team against Pakistan on 8 occasions, winning 6 of those occasions.

Misbah’s defensive approach has already undergone strict scrutiny by cricket pundits and has been a victim of cynics for lacking intent of victory. He has lot of stigmas to be removed. The spitfire Pakistan nation haven’t forgiven him yet of his turtle-esque Mohali innings during World Cup Semi Final’2011 despite the fact that, under his leadership, he has won them every bilateral rubber in year 2011.

Now with England series ahead, the arena is paramount. It’s time for Misbah to prove he is astute, to prove he can deliver and salvage and to prove his defensiveness is productive and fertile as, sometimes, vulnerability can be your biggest strength. If he can pull off something marvelous out of coming Test rubber against England then the dark spots of Mohali mayhem might vanish. The nation will start remembering him in good words. Today, if Inzamam-ul-Haq is remembered as good captain, apart from that good tour to India in 2005, it is because Pakistan drubbed England 2-0 under his leadership. Misbah needs to take a leaf out of Inzy’s book. Interestingly, before confronting England Inzy had also won a Test series against New Zealand (1-0) and drawn one against West Indies (1-1) at their homes. Misbah has also done same before locking horns against England. 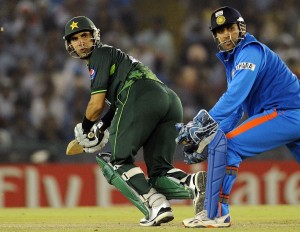 He must keep looking over his shoulder as, finally, the time has arrived for him to exonerate himself of Mohali crime. (Photo by: Prakash Singh/AFP/Getty Images)

Like a firefighter, Misbah has ascended Pakistan to status of a challenging team but if he fails now, against England, the ladder won’t take long to slide him down: done and dusted by opposition. His captaincy will be questioned. The wins vs New Zealand and Sri Lanka will be forgotten. Ghosts of Mohali will be exhumed. Good start to captaincy will turn into catastrophe. Cynics will get alive again calling for his head. And who knows he might be playing his last Test series, at least as a captain. He will be turned into an expendable. He has been Pakistan’s lynchpin during all the adversity following spot-fixing scandal but, on harsh note, it is not very hard to penetrate a fact that “lynchpins” are expendables; they are not given chance to recover, they are just removed when malfunction.

On a brighter note, Misbah can take Pakistan Cricket to altitudes of glory. Win in this series will, to some extent, remove stigmas which are on Pakistan Cricket. Other teams will again start considering them a hardheaded opposition, not a team for granted.

If they win this series, they will complete golden jubilee of bilateral Test series wins. So far they have won 49 Test series in their history. However, by including three-Nation Asian Test Championship (1999), they have already won 50. In Test Cricket, Pakistan also keep the 3rd best Win/Lose Ratio (1.12) which is behind only to England’s Ratio (1.24) and Australia (1.78). They are among only 4 Test teams – England, Australia, South Africa others – to have won more Tests than lost. Their current bowling strength is astounding. In 2011, Pakistan played 10 Tests and bowled against opposition in 20 innings out of which 19 times they “all out” them. Only once, in Sharjah vs Sri Lanka, the opposition declared.

Win against England in this series will earn them 4 consecutive Test series wins. Only, once before – in 1993-94, when they were World Champions – they have won four series on the trot. And with foresight of next Test series, against Bangladesh, a series streak of 5 can easily be hoped.

Pakistan will face England in 1st Test on January 17. Last time, also the only time, they played a Test starting on this very date was way back in Bridgetown 1958 against West Indies; they were followed-on in 1st innings but it was followed by stunning, patient and world record 970-minute innings by Hanif Mohammad with score of 337, only triple-century to date which was scored in team’s 2nd innings.