Ladies and gentlemen, boys and girls and children of all ages…Welcome to the Pakistan cricket pessimists zone!

Today, my rant will focus on our brilliant batting side. More like the team’s backside, if you know what I mean.

By now you may have gathered that I’m a bit upset about our batting. Seriously, I was sooooo looking forward to having Javed Miandad back as a batting coach for our team. But alas, he has declined.

Although your tempers are most probably rising by now, in the back of your mind you know very well that my rant is not really misdirected.

ACHAA! NO… You beg to differ! Ok! Then answer me this: Name any batting “legend” other than Javed Miandad that Pakistan has produced. Zaheer Abbas? Ummm OK, I’ll give you that one. BAS?!! Inzi and/or Hanif Mohammad are not legends. Seriously… do you hear people talk about them in the same breath as Miandad? I don’t think so.

Don’t get me wrong! I’m not suggesting that we haven’t produced GOOD batsmen. We had! Saeed Anwer and Amir Sohail who were the best opening pair ever! Then you have Mohammad Yousuf and Younis Khan. Oh… and our “Karachi ka Pathan” Shahid Afridi; Also Inzamam and Hanif Mohammad, etc. But still no legends!!! 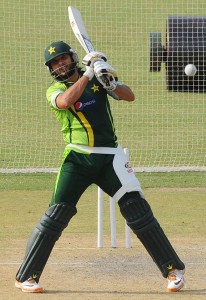 No Tendulkars, Laras, Pontings or Richards. The saddest part is that there are none in the making either :(

Just imagine, not a single Pakistani batsman was able to make a century in the last world cup, although the wickets were batting-friendly tracks of the subcontinent. None even wandered close to the top twenty run scorers. How in the world did we reach the semi’s then? Because of our bowling, that’s how!

Our bowling side has been carrying the team on its shoulders for the past gazillion years. We produced arguably the world’s best opening bowl pair in Wasim and Waqar. Both are rated among the top 5 ODI bowlers of ALL time, with Akram topping the list.

Oh… and how could I forget to mention our dynamic leader Imran Khan! The flamboyant “Rawalpindi Express”! The restless batsman turned bowler! The original Pathan,  Afridi (the best bowler of this world cup)!

In fact, just look at the talent we produced in Amir. Foolish yes, but talented nonetheless. I’m sure in 5 years he will come back with a vengeance, unlike any other.

It really hurts when you listen to the trash that is dished out to our batsmen by the media and commentators.

“They were strokeless and clueless. Pakistan’s batsmen are proving that while you cannot win a Test match in a single session you can certainly lose one.”

“Batting has been a long-standing problem for Pakistan, but it has compounded after the retirement of Inzamam-ul-Haq and disappearance of Mohammad Yousuf.”

“Pakistan were hesitant and hapless; The statistics make worrying reading for Pakistan’s batting coach. In their three innings in this series they have been 47 for six, 41 for six and now 36 for six.”(Pakistan’s tour of England, 2010)

Where then from here?

To be honest, deep down inside, I’m not really a pessimist when it comes to our cricket team. Heck… I am a diehard fan!

That rant was just to vent some frustration on not winning the cup. And yes… I still entertain the notion that the match was fixed at the state level!

The future for our batsmen me thinks are the likes of Umar Akmal (very unlike his elder brother Kamran “drop”mal). The kid has a fight in him. He has the needed aggression but unfortunately lacks temperament. But this is what we need! We need go getters and not defensive players. Just bash some temperament into them and voila!

So, finally, I end my rant with a vote for infusing more ‘young blood’ into our batting side. Everyone in favor say ‘I’!