Chief Minister of Gilgit-Baltistan (G-B) Hafeezur Rehman has stated that the Gilgit-Baltistan Expressway would be the highest altitude road in the world. He made this comment while talking to PTV News. In addition, he said that the cost of this project is Rs. 82 billion which will essentially bring economic revolution in the entire region.

The minister also said that the road will minimize the distance between two regions by several 100 kilometers. He added:

“The proposed Shonter-Astore road will reduce the distance between Azad Jammu and Kashmir (AJK) and G-B by several hundred kilometers. Moreover, it will also cut travel time between the two regions”

Besides boosting trade activities in the G-B region, the road linkage projects will also assist in agricultural production of the area to various parts of the country.

Hafeezur Rehman also lauded the efforts of the federal government for supporting the region. While praising the prime minister, he said that the government had approved projects worth billions of rupees. Subsequently, Gilgit-Baltistan is now on par with the rest of the country.

Additionally, he affirmed that G-B will be a tax free zone for imported machinery. He stated:

“All the imported machinery for G-B will be tax-free, which is another great incentive from the government. CPEC will not only help us in solving the long-standing energy issue but will also help develop road infrastructure and information technology systems”

The chief minister also proclaimed that an international standard airport would be established in G-B.

According to the Hafeezur Rehman, the governments of Xinjiang and G-B signed a protocol agreement. According to the contract, people from both sides will enjoy visa-free travel to the region.

Gilgit-Baltistan Expressway is going to be the highest road in world. Furthermore, the developments under CPEC are going to be immense for Pakistan.

Do you think this project will foster relations between two countries? 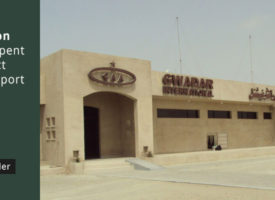