Muhammad Asad (1900 – 1992), formally known as Leopold Weiss came from a long line of Jewish Rabbis. His work as a part-time freelancer for the newspaper Frankfurter Zeitung in Jerusalem brought him closer and closer to the Muslim world. Though Jewish at the time, his writings were well appreciated for his understanding of Arab hesitancies and Zionist movement.

Seven years before accepting Islam, Muhammad Asad had a dream that most Muslims would find a heavenly blessing. At the time he had a habit of keeping a dream journal in which he would jot all his dreams down as soon as he woke. This specific dream had him riding in a train in Berlin which eventually came out of a tunnel and got stuck in a plain of clay. The throng of people abandoned the train and remained confused about what to do next. Asad however, found his way to a camel on which a man sat dressed in a white-and-brown striped abaya with short sleeves and face hidden. Asad joined the man and they rode towards a warm white light, and all the while he felt a greater sense of happiness and peace than he had ever felt. As he approached the white light, a voice called out “This is the westernmost city!”, and he woke up. A few years after converting to Islam he told this story to the King of Saudi Arabia, a close friend at the time, and was shocked to hear that many times, non-muslims would see the Holy Prophet (pbuh) in their dreams dressed in this very same manner.

In 1926, while living in Berlin, Muhammad Asad wholeheartedly accepted Islam. At the time he said:

“Islam appears to me like a perfect work of architecture. All its parts are harmoniously conceived to complement and support each other; nothing is superfluous and nothing lacking; and the result is a structure of absolute balance and solid composure.”

An interesting part of his life began when he came to British India in 1932. There he met Muhammad Iqbal who presented his idea of an Independent Pakistan. Muhammad Asad was given Pakistani Citizenship in 1947 and was made the Director of the Department of Islamic Reconstruction. In this position he provided input in creating Pakistan’s first constitution in 1949. He also held the position of the Head of Middle East Division for the Ministry of foreign Affairs along with being appointed Minister Plenipotentiary to the United Nations. 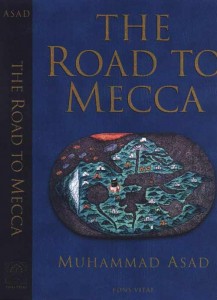 One of his most famous achievements was the writing of the book “The Road to Mecca” which was published in 1954. The book retold the story of his spiritual odyssey where he examined his early life and his travels to the Muslim world which ultimately caused him to accept Islam. The book won critical acclaim throughout both Western and Eastern societies.

Throughout his life and writings, Asad expressed a strong objection to Zionism from the very beginning, even before converting to Islam. He strongly opposed the occupation of Palestine and believed that Arabs had as much right to the land as did the Jews. He blatantly challenged the idea of viewing the Zionist-Arab conflict from only the Zionist perspective and ignoring the views of the Muslims.

Other than “The Road to Mecca” Muhammad Asad published a number of others books and documents. A few of these are:

Muhammad Asad and his Family

Though Muhammad Asad came from a long line of religious Jews, his father and mother were relative liberalists. Rather than being a Rabbi, as was the tradition in the family, his father decided to become a lawyer. After a period of time, his father came to understand Muhammad Asad’s conversion to Islam and they maintained a healthy relationship.  The relationship between Muhammad Asad and his family brutally ended when his father, stepmother and sister all perished in concentration camps during World War II. He was also arrested in Lahore a day after the war broke out by the British, under assumptions of being an enemy alien. After the end of the war Muhammad Asad was released and reunited with his family.

Muhammad Asad was married three times. First in Germany with Elsa Schiemann with whom he had his first son, Henrich. Second in Saudi Arabia with Munira whom he had a second son, Talal Asad. He married Pola Hamida Asad, his third wife in Spain.