226 personnel including 166 airmen and 5 female commandos of Pakistan Air Force (PAF) completed the basic anti-terrorist training course in Kallar Kahar on December 22. These men and women are part of the PAF’s erstwhile 312th Special Service Wing, now known just as Special Service Wing (SSW) which has somewhere around 1500 commandos for quick deployment as and when required.

It is a comparatively new special operations service component in Pakistan Armed Forces, after the prestigious army-led Special Services Group (SSG) and navy-led Special Services Group Navy (SSG-N). These forces are tactical deterrent against the threat of state and non-state actors which are engaged in irregular, asymmetric warfare against the state security apparatus. Such sub-conventional operations are undertaken when it is not possible for the aggressor to fight directly, risking the massive ire of the global community at a time when the world is already knee-deep in trying to contain the menace of Al Qaeda and Daesh.

From the Pakistani perspective, the list of enemies has been increasing dangerously. At first there was just one visible enemy in the form of India, now there are hundreds of religio-political and religio-ideological terrorist groups operating as international drug mafia cartels hiding behind the façade of “jihad”. These groups emerged from the Middle East and now infest the heartland of Central Asian Republics (CARs), including South Asia and South East Asia.

However, Pakistan’s traditional enemy continues to be India and its belligerent military forces for reasons well known. Since its creation, Pakistan’s large neighbor (geography and economy wise) has continued to threaten its comparatively weaker neighbor’s existence. It triggered an unwanted nuclear arms race in South Asia and the continuous modernization of conventional weaponry and defence equipment, thereby leaving many people penniless on both sides of the border.

On April 13, 1948, despite very poor health, Quaid-e-Azam Muhammad Ali Jinnah visited the erstwhile Royal Pakistan Air Force College in Risalpur with his sister, Madir-e-Millat Mohtarma Fatima Jinnah, to interact with young officers and their illustrious instructors to share his thoughts on what Pakistan should do to ensure protection of its airspace. He also reviewed a ceremonial parade comprising flight cadets of 2nd, 3rd, 4th and 5th GD(P) courses. Without naming India, the Quaid remarked, “I am well aware of air developments in other countries and my Government is determined that the Royal Pakistan Air Force will not lag behind.” Later he had remarked on another occasion at a PAF unit, “There is no doubt that a country without a strong Air Force is at the mercy of any aggressor. Pakistan must build up her air force as quickly as possible. It must be an efficient air force second to none and must take its right place with the Army and the Navy in securing Pakistan’s defence”.

The Basic Doctrine of Indian Air Force 2012 has a section of Offensive Counter Air Operations (OCAs) which are aimed at “destroying, disrupting or limiting the enemy air power as close to its source as possible“. A key component in OCAs is the “Suppression/Destruction of Enemy Air Defences (SEAD/DEAD)“. SEAD/DEAD is defined further as an activity which “neutralises, destroys or temporarily degrades enemy air defence systems in a specific area by physical attack (hard kill) and/or electronic warfare (soft kill)”.

We can recount the PNS Mehran attack in Karachi which took place on May 22, 2011 in which assailants specifically targeted critical Lockheed P-3C Orion surveillance aircraft. Later on August 16, 2012, militants attacked PAF Base Mushaf in Kamra, destroying a Saab 2000 Erieye radar plane. Attacking a naval aviation and later an air force facility revealed patterns of attacking airfields for maximum damage. This is also mentioned as part of OCAs in the Indian doctrine:

“Though the importance airfelds as targets is on the decline, on account of rapid runway rehabilitation systems and the shift of focus on effects based operations, but even so airfelds being static concentration centres would continue to containdensely packed high-value targets. Aircraft on the ground at airfields are more concentrated and vulnerable than they are in flight. Experience of the 1991 Gulf War has shown that even when aircraft on ground are protected by Hardened Aircraft Shelters (Blast Pens as the IAF terms it), they are not sufficiently protected; because of the precision attack and penetrative capability of PGMs. Apart from aircraft, the damage or destruction of critical base facilities can also prove to be decisive. When airfelds are unable to provide landing, take-off or critical support facilities (maintenance, fuel, ammunition), air forces are effectively grounded.”

Hence we can see that whether the attacks on these critical defence assets were executed by Al Qaeda or TTP, the ultimate beneficiary was India’s military. Millions of dollars in damages were not as damaging as the symbolic, psychological damage they inflicted during very sensitive times. We are talking about the era in which nationwide suicide attacks were at their peak and the integrity of our protective capabilities were being questioned by friends and foes alike. 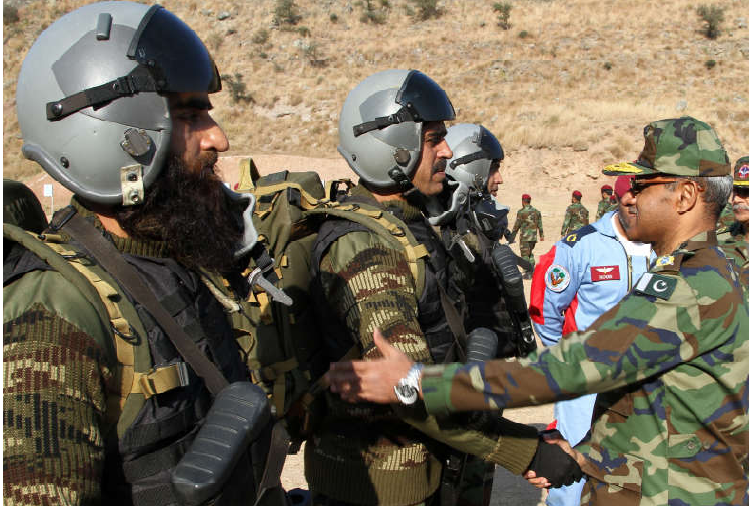 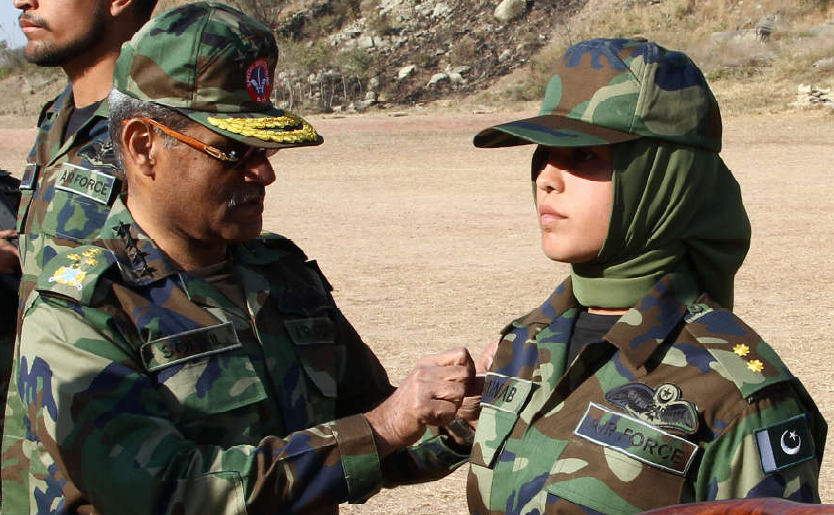 SSW commandos are initially trained at the SSG’s school in Cherat, after which they are given specialized training at PAF’s Ground Combatier School in Kallar Kahar. Exceptional commandos are sent for advanced training with the US Army’s 1st Special Forces Group and 75th Ranger Regiment. In the recent ceremony, Air Chief Marshal Sohail Aman made a very important announcement that the school facility at Kallar Kahar would be raised to that of a base. That such a special operations base is being raised reflects the significance given to counter terrorism efforts as part of Operation Zarb-e-Azb. After land forces, Pakistan’s air warriors have played a crucial operational role in eliminating enemy hideouts.

These and similar anti-terrorist trainings assume greater significance when viewed in context of attempted attacks on two PAF bases in Quetta (2014) and a proper attack at Camp Badaber attack, Peshawar (2015). Whoever the pawns are, it is evident enough who the actual player is.