Military officers around the world hold varied opinions on individuals, organizations and incidents which they take a particular interest in. It is natural for their views to come from a preset institutional perspective, often accompanied with bias and sharp criticism.

But what happens when some of these senior commanders make controversial statements which do nothing except promote further misunderstandings and hate? We recently saw Britain’s Chief of Defence Staff General Sir Nicholas Houghton who was taken to task by Jeremy Corbyn for issuing political commentary on the latter’s nuclear policy.

Senior officers, especially on command-level assignments, should by principle abstain from making political comments. They should most certainly stay clear from making immature comments which only reflect their own poor grooming. Therefore, I believe Lt Gen Kamal Jit Singh (KJ Singh), the General Officer Commanding-in-Chief of Indian Army’s Western Command, has not been groomed properly. He appears to be a scruffy and undisciplined general officer who must have given a tough time to his instructors in Dehradun.

He spoke at a conference recently, jointly organized by the Western Command and Panjab University in Chandigarh. He made several statements against Pakistan, saying clearly it will “continue to be a problem for India”. There is nothing surprising about such statements, they are similar to those issued in all other countries. But what clearly showed that he transgressed limits of decency was a sarcastic couplet which he reportedly composed from Pakistan’s perspective. He said:

“Saintaalees mein, painsath mein aur Kargil main pittey hum, ikathar mein aur Siachen mein luttey hum, kuch to hai Pakistan ki fitrat mein, ki talkhiyan aur jahalat hoti nahi kam” (In 1947, 1965 and in Kargil we were beaten, we lost in 1971 and in Siachen, yet there is something in the nature of Pakistan that bitterness and ignorance is not getting reduced).

My my General sahib, you do seem to have a knack for poetry! Though you could do some improvements in your rhyming and structuring. I won’t ask you to take your words back but I do wonder how the environment in your training institutions deteriorated to this level. You will not find a single serving Pakistan Army officer resorting to such immature, callous commenting, despite the irrefutable evidence we have of your country’s primary role in fomenting terrorism on our soil.

You claim that we (Pakistanis) were beaten in the 1947, ’65 and ’71 wars. Well then isn’t this an admission of the fact that these wars were triggered by your adventurist military? We’ve been saying all along that we never started these wars, it was India which repeatedly provoked Pakistan into self-defence, and now 68 years after independence you start chest-thumping over it. In 1971, you fooled the world into accusing Pakistan of war crimes in Bangladesh and ironically, your own Prime Minister has been observed this year proudly acknowledging state support for Mukti Bahini which eventually led to Pakistan’s breakup.

Your army’s official website uploaded contents of the Defence Services Staff College (DSSC) course, which includes a chapter on how India provided complete support to Mukti Bahini. What more evidence do we need that since August 14, 1947, you have been bullying us into eventual dismemberment?

You repeatedly allege that Pakistan is conducting proxy warfare on your soil. The Mumbai attacks were pinned on us too. Your intelligence agencies present us as some sort of mighty, incontestable fighting force skilled in destabilizing your country and yet here you say it is we who suffered beating in your hands. I have no qualms in admitting that it’s true! We always wanted peace and prosperity for ourselves and our neighbors.

But we realized long ago, fortunately, that the desire for peace cannot be begged for. It has to be earned from a position of strength. We couldn’t match your conventional military superiority but our “jahalat” oriented scientists and engineers built minimum credible deterrence facilities within no time. Your army later came out with the much debated Cold Start Doctrine to force your way deep inside Pakistani territory.

You accused us of sponsoring terrorists against your country. According to you, we used the same strategy several times and faced humiliating defeat. In your own words, “Doing the same thing again and again and expecting results is the hallmark of being idiotic”. So we, the presumed ‘idiots’, silently developed Tactical Nuclear Weapons (TNWs) for precision-strike capabilities within reach of your presence across the border in Punjab to tame your changing, more hardening doctrines. Why are you so concerned about them? By your presumption, if we really repeat old strategies, how have your “geniuses” in Delhi not been able to tame us? Isn’t this what your veteran analysts wish for?

Speaking of which, haven’t you got too many things on your own plate to focus on? The One Rank One Pension (OROP), perhaps? How long will you keep ignoring or beating up your own disgraced veterans, who’ve now started to return their medals? Is this the honor you bestowed upon them by throwing them into self-initiated wars and then discarding them like worthless assets? Now don’t start accusing them like your Defence Minister Parrikar about being violent and acting aggressively. You ingrained this very attitude in them by indoctrinating hatred for Pakistan’s very existence. If they’ve now turned the barrels toward you in the hopes of getting their basic rights, you cannot escape. You promised them almost a year ago that OROP will be implemented soon. It still hasn’t seen the light of day and the draft being floated still excludes priority requests made by the servicemen.

The resentment has reached a dangerous point. More clashes between the police and veterans can be expected.

“Much as the serviceman, and by extension the ex-serviceman, abhors the idea of agitating on the streets, undertaking fasts or indulging in collective protests, today he sees these as the only options in an uncaring environment…Our polity by design and default has proceeded to politicize, downgrade and demoralize its own armed forces and veterans.”

And in a manner that shocked many of his contemporaries, the general officer added:

(Neither China, nor by Pakistan, our (Indian) army was destroyed by India)

So you see General Singh, you may continue with your grandiloquence. But as an ordinary Pakistani citizen, I would seriously advise you to look within your own house before diverting your attention elsewhere.

If the OROP fails to materialize and you retire, the good news is you can continue making a living. I’m sure the BJP or Shiv Sena would be delighted to employ you as a Resident Poet specializing in bashing Pakistan, whom they called ‘Darbari Shair’ in the old days. 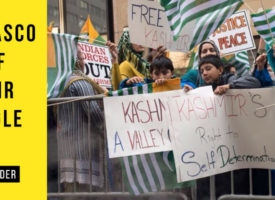 The fiasco face of Kashmir Struggle