India’s purported “strikes” on Balakot passed. Cease Fire Violations (CFVs) along the LoC by Indian security forces are on the rise. Meanwhile, the BJP leadership is flexing its muscles, issuing hard-worded statements with long-term implications. Defence Minister Rajnath Singh, former Home Minister a reformist czar, recently suggested his country may not necessarily abide by the No First Use (NFU) nuclear policy. In Pakistan, the absence of a functioning Defence Minister 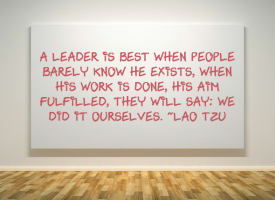 The Importance of Leadership

A leader is best when people barely know he exists, when his work is done, his aim fulfilled, they will say: we did it ourselves. ~Lao Tzu When you think of ‘leadership,’ what comes to mind is probably managers working in companies, politicians or other people with a high public profile. There are many roles where leadership is overtly part of the job, but the qualities of leadership are needed