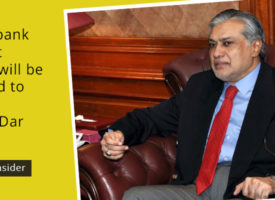 Finance Minister Ishaq Dar has claimed in an interview recently that the notorious Swiss bank accounts details will be exposed to public. He stated that those Pakistanis’ having billions of rupees in their Swiss bank accounts will be scrutinized and prosecuted accordingly. Initially, Swiss officials were not willing to share this confidential information but in his interview Dar affirmed otherwise. He clearly said that Switzerland and Pakistan have reached a consensus