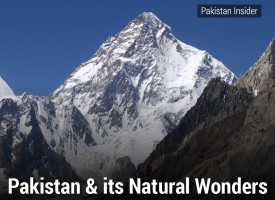 Pakistan is no stranger to the kindness of Mother Nature and hence houses some of the most interesting wonders found in the wild. Below is a list of a few of the fascinating natural wonders features unique to this country. Princess of Hope   Natural forces and influences have resulted in a land formation closely resembling a woman with folded arms, clad in flowing robes. The statue stands tall and

Bird watching is a recreational past-time for some and a serious hobby for others. Along with hosting some of these nature enthusiasts, Pakistan also has the perfect locations for their activities. While there are a number of sites perfect for bird-watching both resident and migratory species, some of the more prominent sites are: 1. Kinjhar Lake Wildlife Sanctuary Situated in Thatta District, Sindh. 2. Kirthar National Park Situated in the Kirthar range mountains

Think of puppets and you assume the puppetry culture in Pakistan is limited either to the days of yore or simple sock creations conceived for the mindless entertainment of the young. This couldn’t be further from the truth. Serving almost as an oasis of culture in an otherwise urban city, the Museum of Puppetry is nestled comfortably in the outskirts of Lahore and offers the rarest glance into the almost

Forts have been constructed throughout history, some as a practical measure to subdue rebels or win wars, others as a show of strength of a ruling party or to serve as a more secure and formidable palace for the powerful. Whatever the purpose, forts provide a good view into the past, and also serve as great examples of both architectural ingenuity and ancient aesthetics.  Pakistan is home to some of

Epic peaks, rushing water and a chill in the sweet mountain air characterize the picturesque valley of Hunza, nestled deep in Gilgit-Baltistan, and engulfed by the great Himalayan and Karakoram ranges. Summers are the ideal time to pay a visit to this valley; it offers a respite from the intense heat prevalent in the rest of the country yet is still warm enough to be pleasantly welcoming. Hunza is a

Did you know that Karachi is the most visited city of Pakistan in terms of incoming and outgoing travelers; and that, most travelers to Pakistan come from the United Kingdom. Surprising Han… Take a look at the infographic below, produced by Jovago, and see more domestic and international travel insights of Pakistan. Note: The statistics in the infographic are based on a survey of all the travelers who made bookings through Jovago (an online