Imagine living in a country your whole life, abiding by its laws, following laid-down procedures and chanting ‘Jai Hind’ for all to hear. Then one day, you wake up and find yourself declared stateless in the very territory you called home.

If this may sound horrible, one cannot even begin to fathom the tragedy which befell almost 2 million people in India’s northeastern state of Assam.

The Government of India had been conducting an exercise to filter out residents whom it considers ‘legal’ versus the aliens. A corresponding list known as the National Register of Citizens (NRC) was prepared. While government officials insist rhetorically that it was mandatory for domestic security interests, others consider it a planned initiative to deport millions of Muslims who migrated from Bangladesh. 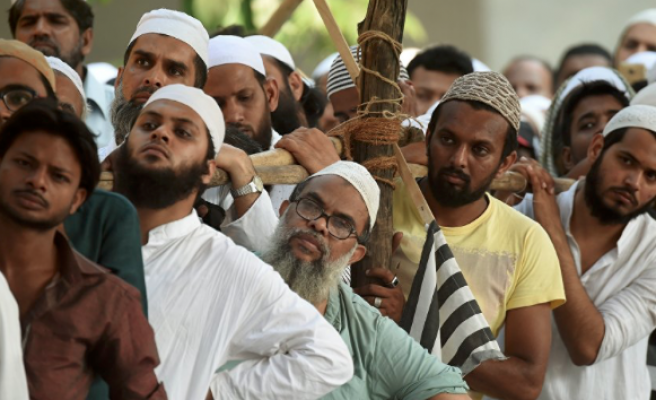 The communal makeup in Assam has been disturbed since long with many ethnic and cultural denominations voicing concerns about their quota in land rights and job security.

Those who have been rendered stateless can credit Indian Administrative Service (IAS) officer Prateek Hajela for this ‘feat’. Hailing from Madhya Pradesh, Hajela has become the subject of continued controversy for declaring the submission of documents by citizens such as affidavits and village head certificates as inadmissible.

The Bengali community, particularly Muslims, sensed this as a “predetermined” move to render them stateless. In fact, their expulsion has been the predominant demand by local Assamese since 1979. In this context, therefore, Hajela’s insistence that the government harbours no communal agenda carries no weight.

The process for upgradation of NRC in Assam stated in 2013, but it is only now that efforts have been pushed through. Observers of Indian politics within Pakistan consider it another indication of Modi 2.0’s growing assertiveness in the domestic political arena.

The message is clear: A supercharged Hindutva regime which illegally subsumed Indian-held Jammu & Kashmir against the aspirations of its Muslim populace and without regard for international norms can and will repeat the same assertiveness in Assam. So basically, these maneuvers are evidence of New Delhi’s increasing lust for demonising Muslims.

The BJP leadership’s growing political confidence may be appealing for its large electorate right now, but its consequences in the long run can prove disastrous for India’s own internal security.

On the outset, the BJP has given weightage to Assamese over Bengali migrants but these assurances are not enough to assuage the larger socio-economic concerns inherent among the large disgruntled lot. For example, security incidents caused by Assam-based separatists per annum remain over the 100 mark, despite a significant drop since 2016.

The United Liberation Front of Assam (ULFA) was a major guerrilla group advocating for independence from the Indian mainland. New Delhi had made great strides against its operations with the support of the Myanmar and Bangladesh governments. In a scenario where Bengali “aliens” have no option but to repatriate back to Bangladesh, how much of a cooperation does India logically expect from their Bangladeshi counterparts if a massive chunk of 2 million people attempt mass migration? The costs involved are beyond imaginable.

Not that the establishment in Dhaka has maintained a track record considerate of universal human rights. The continued mistreatment of Biharis and Rohingyas as prominent cases in point.

Filippo Grandi, the UN High Commissioner for Refugees, expressed concerns about the fallout of India’s action on basic human security and rights. Such statements for the sake of historical records lose their value unless a violator is reprimanded by other member states of the UN. After Kashmiris and Rohingyas, Bengali Muslims have to bear the brunt of New Delhi’s change of heart.

Should Pakistan Be Bothered?

Pakistan’s leadership has been vociferously highlighting BJP’s Hindutva-centric fascist agenda against the Muslims as a popular narrative in support of people in Occupied Jammu & Kashmir. This campaign has gained so much traction that even US Presidential hopeful Bernie Sanders could not stop himself from condemning Indian atrocities.

Essentially, it was imprudent for Islamabad to promote the “us” (Muslims) versus “them” (Hindus) narrative. Calibrated focus on radical Hindu elements as compared to followers of the religion in general have so far not fostered any domestic resentments. Pakistan has also been vocal about rights of Rohingyas and has been hosting millions of Afghan refugees on multiple extensions.

If championing for the protection of Muslim rights is in its own interests and adds weightage, Islamabad should voice support for the stateless people of Assam at all possible human rights forums. The Organisation of Islamic Cooperation (OIC) should be apprised of India’s insistence to victimise Muslims in line with the Prime Minister’s (justified) belief that BJP seeks a Hindu Brahim supremacy in India, just as Adolf Hitler wanted the ‘Aryans’ to dominate the German gene-pool.

The matter of Jammu & Kashmir has visible stakes for Pakistan but Assam is a different matter altogether. There has never been any political, diplomatic or moral support by Islamabad for the Muslims in Assam. They have just been rendered stateless en masse. There is no “ISI” or “Jaish” involved in the northeast insurgency.

If Modi can speak on Balochistan and Gilgit-Baltistan during his previous tenure, what is stopping Islamabad from a proportionate tit for tat viz Assam?

Prime Minister Imran Khan has a golden opportunity at hand.

3 Events That Changed the Course of Pakistan’s History