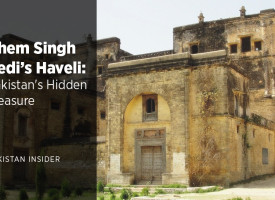 Located approximately 100 kilometers from Karachi lies another historical gem of Pakistan, called Makli. Makli is located close to Thatta, which used to be the capital of lower Sindh till the seventeenth century. Designated as a United Nations World Heritage site in 1981, Makli is one of the largest necropolises in the world. Measuring approximately 8 km in diameter, it holds the graves of approximately 125,000 rulers, Sufis and many

Pakistani or not, everyone has heard of Karachi nowadays. Karachi is in the news as often as Beirut was a few years back. Many folks are wary of going to Karachi and try avoiding it like the plague. If they do end up in Karachi, they are given strict instructions: Stay indoors and don’t go out too much! If you do need to go out, stay in the “good” areas